I must apologize for my lack of an appearance as of late. The semester is coming to a close, so my professors feel that it’s necessary to assign ridiculous paper topics and give us a couple days to crank out 20 pages. Nonsense, I say! 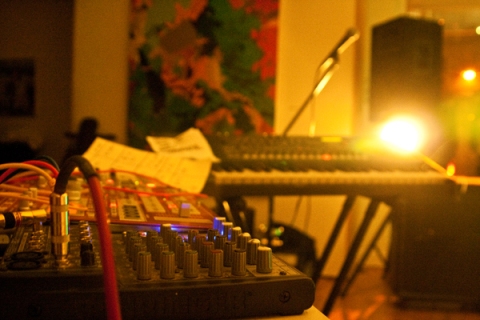 I was able to find a break though, in all the typing of papers and doings of math, to get myself to a local show. I figured I could use the time away from the computer and scattered notebooks, you know? So, I hit up the Gallery 119 (Lowell, MA) to go see some experimental rock bands. I had only heard one of the bands prior to Friday night, and I really had no idea what to expect. I’ve always been one for strange sounds, but only recently have I really started to appreciate the concepts of ambient noise. Allow me to say that this show was REFRESHING. 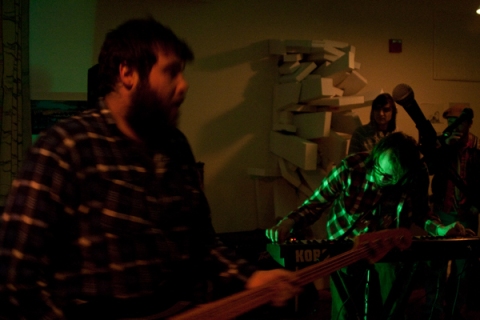 The line-up consisted of Action Park, Babydriver, The Big Big Bucks, Birdorgan, Colleen Green, and Home Body (no website). I could spend this paragraph doing a review of the show BAND by BAND, but that would just be too mundane. So, I will just say… Every single one of these bands were incredible. So many crazy noises and sounds being incorporated into a single song… It was the most relaxing/chill show, and at the same time the most energetic and free-spirited. One band that sticks out in my head is Home Body: a guy/gal duo using synth and poetic vocals, creating a really energetic/dancey atmosphere. Epic.

Please also allow me to ask of all my readers and fellow-bloggers to give new music a chance. Nowadays, the only music you hear on the radio are the “Top 40” which only ever consists of hip-hop, rap, and RnB. Unless you’re actively involved in your own music scene, then you probably don’t know what’s going on in terms of local music. Some of the greatest musicians you’ll ever hear live, will never EVER get airtime on your favorite radio station. So please, get out and go to a local show – find some music that you don’t really like or understand (something weird) and give it a chance. Might open up some creative flow! Who knows?!

Until next time, internet!

The Search For Elephant Rock. 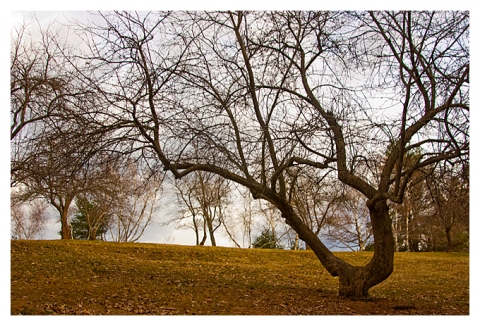 First off… In my last post I talked about how I hoped our adventuring crew would grow in number, and that we could go in larger and larger groups as the summer progresses. WELL. Yesterday, that group grew! Hopefully, it doesn’t stop there… So alas, here’s the breakdown:

It’s about 11:00am when I check my Facebook (yeah, I’m a social networking addict). My friend had posted on my wall, “Let’s go play outside.” I agreed, of course – and we planned to grab a group of people, and meet up at a placed called Ward Reservation (North Andover, MA). I’ve actually found a website, through Google, that lists all the hiking and adventuring spots in New England – and surprisingly, as we’ve been knocking them off the list, we haven’t found a dull trail! Moral: Spontaneity wins.

We set off at the base, or what we thought to be the base, of Holt Hill. Not even a hundred feet into the trail, we came to a large clearing lined with trees and rock walls. It was gorgeous. Once again, we picked a great day to adventure. It was a bit windy, but it was no winter-wind that’s for sure. We enjoyed the vastness of the clearing for awhile, taking pictures of the trees and rocks… And each other, of course… Then we pressed on. We had found another part of the Bay Circuit Trail (which wasn’t mentioned in the Harold Parker post, but that’s what we were traveling along also) and followed that for awhile. 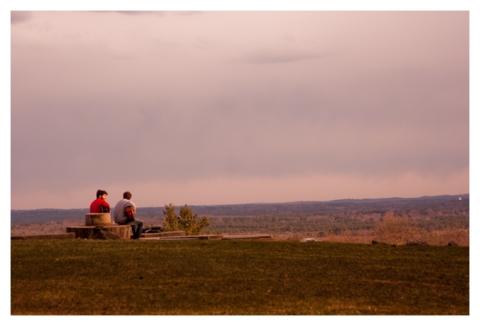 The trails at Ward Reservation are definitely more intense than the past two places I’ve talked about. Now… When I say intense, I don’t mean for you to think you have to be Stallone to get to the top… I guess, I mean to say… They get pretty steep. I think we all found ourselves hunched over, leaning forward, as we walked up these steep, narrow paths (so you can imagine). Once we got up to the top of Holt Hill, we could see Boston on the skyline. It was about 20 miles away. I didn’t have my glasses on and squinted to see it – but oh, it was there. At the top of the hill was also a giant stone compass, where we found a couple guitarists just shootin’ the shit and doing their thing. We didn’t stick around too long, since we had a trail map and saw “Elephant Rock” on it… We had no idea what to expect, or even why we would’ve bothered to check it out, but we were enthralled and had to go. So we did.

I will say, Elephant Rock was probably the coolest part of the adventure… Mainly because, it was the adventure. Getting to the top of the hill wasn’t enough for us. That’s probably the best thing you can do if you want to search for adventure, by the way – grab a trail map, put your finger on the most interesting spot you can find, and figure out how to get there. Hey, it worked for us! The trail we took had spit us out in a GIGANTIC clearing scattered with tree stumps (where’d all the trees go?). It was definitely a sight to look at, and our timing was perfect – the sun was going down, giving us a nice sunset, and just before it went away it lit up the treeline one last time – which was our cue to head on out; our adventures were over.

If you ever find yourself looking for a place to go for some great pictures, a game of frisbee (or anything you can ever imagine doing in an open field), Ward Reservation is your stop. The trails are great for walking, jogging, running, or biking – so you really can’t go wrong here.

Click to view all the photos taken at Ward Reservation. 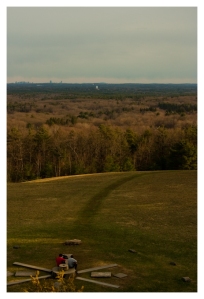 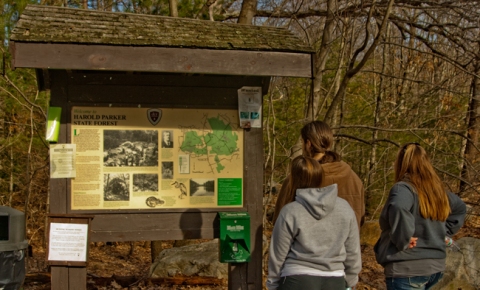 Well, internet… It was a very calm day, yesterday. I spent the morning knocking out some Algebra homework; a couple cups of coffee eased the pain of morning spent doing math. However, doing homework in the morning gets me using my brain – which in turn has me stoked to get out and about afterwards. Moral: Be productive, it feels good.

The newly dubbed Weekend Hiking Crew (my friends Chris and Rachel, and myself) saw a new face, yesterday! Well, we didn’t actually dub ourselves that… Actually, I just made that up on the spot, but I’d like to see this weekend “group” grow throughout the summer as I attempt to get my friends involved. Everything is better in numbers… Except drinking milk, or something of that nature… That’s better done solo. I’m a big fan of digressing, aren’t I?

So, we get together and shoot some hoops (photo) for a bit before taking a drive to Harold Parker State Forest (Andover, MA). Growing up, I had gone to a summer camp in this forest, and still made frequent trips every so often to go for a walk. It had been awhile, so I suggested that we go scope it out and of course the whole group agreed (what else were we gonna do?). We pulled into a lot, and set out on what we found to be called the Healthy Trail (photo), which didn’t take us very far (so we set off making our own trail). I guess “healthy” means an entirely different thing in hiking terms. /shrug

Now, there’s a lot to like and dislike about hiking at this forest. For instance, I liked how the trails were more “rocky” and had a lot to offer aesthetically. There’s a lake that most of the trails, in some way, wrap around (a reason I will most definitely come back in the summer). However, every path you take will somehow spit you out onto a paved road. Though, if you walk along this paved road you’ll find more trails to the right and left. I don’t know, though. For some reason, I don’t like seeing a giant paved road as the “master trail”. Turned me off, a bit. Of course, it’s all in where you want to be when you’re hiking. Had I brought a bicycle with me, this may have been a different story.

Trekking deeper we found a lot of makeshift bridges crossing the lakeside’s swampy terrain. Some of them were heavy logs dropped into place, and some were just large rocks (photo). As I’ll say in every post, today and henceforth in some manner, you gotta love the little things! Coming across a bridge like that, knowing another group of trekkers stood in the same spot you are, and thought “Shit! We gotta get ourselves out of this.” and building an awesome little bridge. It’s really cool, I must say. Maybe I think too much, actually. Haha.

All in all, I would not be unsupportive of those wanting to adventure/hike/camp in Harold Parker State Forest. It’s definitely a great visit, though I’d strongly suggest going during the Summer over Spring. Why? Well, it’s definitely more active in the summer with people fishing and setting up tents to stay for the weekend. So, most likely, you’ll pass some strangers on the way (which usually consists of staying to the right, a mutual nod of the head, and wimpering out a “hello“). If you’re looking to get out, and take an undisturbed walk through the woods, then I would suggest going in the Spring or even possibly Fall. A great trip, nevertheless.

Until next time, internet.